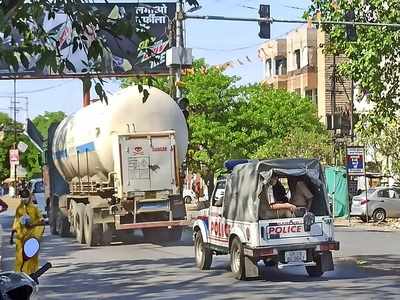 LUCKNOW: Pandemic-battered Uttar Pradesh received its biggest consignment of oxygen late on Tuesday — 600 tons of lifesaving gas, up from an average of 100-150 tons — ending the oxygen emergency for the time being.

“We also have an allocation of 850 tons of oxygen from the Centre, which is the highest allotment among all states. However, to pick up our quota from other states like Bihar, we need more tankers. Earlier, we had only 30-35 tankers, but there are 84 in the fleet now,” said Awasthi.
The state has also activated its oxygen monitoring system, which is a first-of-its-kind 24×7 oxygen-tracking module which enables real-time monitoring of GPS-fitted tankers by district magistrates.

“We will provide police escort to tankers where possible and open a green corridor for quick transport,” said Awasthi.